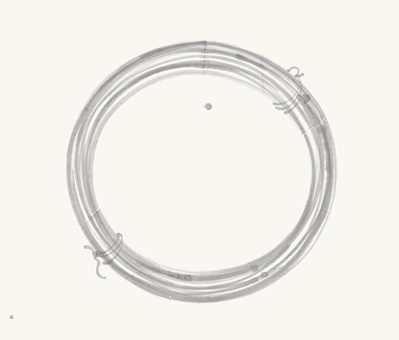 When Jiří Straka places the act of painting at a building site, his ‘picture dimension’ does not appear as a ‘planar dimension’.

When Jiří Straka places the act of painting at a building site, his ‘picture dimension’ does not appear as a ‘planar dimension’. Perhaps that sounds a bit odd, but understanding this factor is extremely useful when seeking to understand Straka’s art. Interpretation of a picture is usually limited to the space within a particular surface: by considering the composition of the picture, an excerpt of meaning is arrived at. But in his work, Straka endeavours to test this cognitive inertia: to let meaning surmount the limitations given by a painting on a flat surface. Naturally, if we give up on traditional painting, which is the usual approach in contemporary art, it is easy to make such a ‘breakthrough’. Nevertheless, Straka wants to do nothing of the sort – he continues to be true to painting and wants, on the condition of not giving up on painting, to free himself of the bonds of the painting. This idea seems at first somewhat paradoxical, for if we do not give up on the painting, how do we free ourselves from it? In that respect, Straka does not concentrate on depiction itself, but ‘in a roundabout way’ concentrates on the means of its creation. That is obviously very clever. Depiction, as an ideographic element, can often make itself independent of the surface, that is to say, the ‘generating of its meaning’ can free itself of the specific event of the act of painting, it can become a complete object of interpretation. For example, when looking at the painting The Last Supper, no one is concerned with the milieu in which it was ultimately made. By means of what is painted in the picture, people only conventionally find meaningful associations. Then, depiction makes itself independent as a sign, and becomes a dimension of the picture on an enclosed flat surface. In a certain respect, the regimen of interpretation of this ‘independent surface’ is the basis of the creation of a classic painting, and becomes the boundary for the generating of meaning.

In Straka’s work, change consists in the fact that he removes the ‘independent ideographic sign nature of a painting on the flat surface’ and relaxes this boundary of the generating of meaning. In this way, his pictorial dimension is no longer a flat surface – it is as if in flat depiction the emergence of meaning has not taken place on the surface at all, and the painting can become a ‘complete signifier’ only in the milieu of its creation.

For example, each of the nine ink paintings exhibited here depicts different objects (various machines) at a building site, as well as dead small animals. The huge format and blank spaces on the paper have the effect that the object of the painting is no longer produced in the regimen of the ‘depiction of nature’, but captures another kind of spiritual experience. In order to understand its spiritual space, we must, with these paintings, reconstruct the site of their creation. That is to say, Straka, by means of the ‘site of the painting act’ changes the structure of the creation of the meaning of the painting, and brings into the painting symbolism that belongs in that milieu, thereby changing the way meaning is generated.

To help the viewers to understand this, we are showing not only nine of Straka’s works, but have also set up a small section of the exhibition with a video recording and photographs. You might not understand why the painter has chosen these particular nine objects for his paintings. But the video recording of the site and the photographs of the process of selecting the object will help you to reconstruct more fully the ‘semantic field’: Straka, who is personally on the building site together with the act of painting, is thus the true starting point of artistic expression; the starting point is not the result in the form of a finished painting. What, then, is most central to an act of painting of this sort? Clearly, it is ‘selection made with vision’ by the subject and the place of the painting. What do we mean by ‘selection made with vision’? It is the process of the painter’s editing of the world. In classic painting, the emphasis is frequently on the presentation of the result of this editing. People put greater emphasis on the result of a painting communicated by a painter – that is, a painted work of art – and they tend to overlook the principles according to which this result was achieved by editing and the way by which it got into the painting. Such an interpretation implies a law: a principle of reciprocity between the painter and the world in a state that is not in itself apparent but determines the creation of the painting, its dissemination, and its being understood. That is why the work on the surface seems actually to be veiling a hypnotic hallucination of the ‘visual selection’. Straka changes this ‘level’ by removing the veil of the painting, and the visual selection appears directly in the work itself.

This act entails a remarkable change. Straka’s paintings no longer have a narrative in the traditional sense of the word. The object of depiction in each work seems to hang in an empty space. The isolated visual percept extricates the object from the world of its previous existence. Whether it is an inorganic piece of tubing, bags of sand, even wires, or originally living but now dead frogs or earthworms, everything has been captured by Straka’s ink painting in a uniform atmosphere of observation. In a certain sense, concerning the nine results of the visual percept that Straka presents, rather than saying that they were painted to show the results, it would be better to say that it was because of their providing a certain opinion of a thing and then making a ‘selection’ on the basis of that opinion. What is the opinion? To answer this question, we must reconstruct the site of the creation for nine isolated works by Straka, and in the process of reconstruction we must form new cognitive links. This, ultimately, is probably Straka’s logical starting point, when he puts ‘painting on the site’ into opposition with ‘painting on a flat surface’, in order to put it to the test. As for the nine exhibited paintings, with the influence of gentle ink painting, the objects have freed themselves from the original state of their existence. But when we link this with the video recording from the site, Straka seems to exhort us: ‘These objects, painted in a state when they are suspended in space, were probably not at all this attractive before the arrival of the painter. Indeed, they have disappeared in the chaos of the building site.’ Why did they disappear from the site? Evidently that was not caused by the fact that these objects as such ‘did not exist’. Their ‘disappearance’ was caused by the logic of the building site itself: the expectation that order would again be made from chaos. ‘Expectation’ primarily means hope, but in fact it conceals our existential relationships with the world and things: since expectation helps us to come to terms with the building site, we choose meanings that correlate to it. But existence, which is not linked with this expectation, is often found in a state where ‘we are looking at it but do not see it.’

Straka wishes to transform this order of the building site into the semantic background of the painting and intentionally carries out a certain decomposition on it. The means of the decomposition is the act of painting interfering with the ‘primary site of meaning’. In this way, Straka has found a starting point for his work: in the complicated structure of the painting, of the site, of the object of depiction, and of the act of painting, he creates a ‘territory of observation’ for the ‘transmission’ of meaning. This territory of observation is the reason why each of the exhibited works is uniformly depicted in an ‘atmosphere of emptiness’. And when the ‘thing’ is extricated from primary ‘cognitive logic’ and placed into a new framework, the relationship between the ‘thing’ and the ‘cognitive definition’ assumes a new freedom. The site of painting – the building site – is then no longer that expectation, but has become an artistic ‘work place’, which we must be confronted with in a new way. This experience is one of the attitudes that Eastern aesthetics takes towards the world – the observation of things with a pure soul.

‘Pure soul’ means freeing oneself from the ordinary world, the perception of the universe by means of a calm, dispassionate view. What is calmness? What is dispassionateness? This is similar to when Straka extricates the building site from the logic of building, he changes the primary logic of ‘things’ and rebuilds the relationship between the subject and the world. The ultimate form of expression of this relationship is the ‘territory’ in which the subject begins a new existence – a change of reality into emptiness, and thus the creation of a perceptual field (viṣaya). It is precisely in this way that the frame of observation, which was newly expressed by Straka’s act of painting and by the object of depiction, changes the real state of everyday experience into an empty ‘site of experience’. In connection with this, rather than saying that painted art works are what is shown at Straka’s exhibition, it would be better to say that this approach to observing things is what is shown, together with the visual selection, which the painter has made with regard to the building site. It is clear that this ‘sphere of emptiness’ is far better suited to ‘looser or tighter, empty, and pale’ ink painting than is ‘conscientiously affirmative’ oil painting. It is probably also something that Straka, who is a Westerner but has lived and studied in China for a long time, has gained as his other harvest.