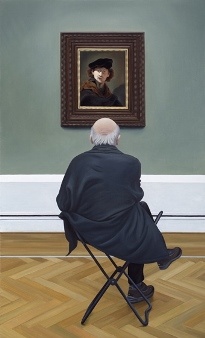 About her latest set, Galleries (2014 to the present), Ivana Lomová says that it began at a Berlin exhibition of contemporary art, ‘which somehow particularly bored me, as if there were actually nothing to look at there.

The Anthropology of Emptiness
About her latest set, Galleries (2014 to the present), Ivana Lomová says that it began at a Berlin exhibition of contemporary art, ‘which somehow particularly bored me, as if there were actually nothing to look at there. So I began to notice those guards who were standing there, and I guess I was beginning to empathize with them a bit, what it must be like... what their lives might look like at home.... I began to be fascinated by the whole atmosphere of those empty rooms, where those people had to stand and ‘guard’, almost like the “serenity” of a temple, floating above emptied-out nothing.’

In the context of her oeuvre, however, the gallery paintings are mainly a continuation of long-term development, a consistent line of work, which may be considered, more than anything else, an anthropological-sociological investigation of public spaces, microcosms (cafés, trains, and, now, galleries) and microstories of human situations that are played out in them. Ivana Lomová’s painterly anthropology is complex: behind the apparently descriptive realism of scenes, upon close inspection, multiple meanings open up. A few of the paintings from the Galleries series offer a kind of composite portrait of the figure of a guard, and show his or her existence defined by looks, the workday (or night) spent in oscillation between anxiously observing others and staring into the void, the alternation of keen vigilance and weary apathy. There is a continuation here of in-depth exploration of states of being lost in thought (such as we know from the Cafés and Trains series) and of investigation of the state of loneliness in the crowd. Apparently there are no visible emotions, but this not a matter of clinically detached research; the paintings are a subtle appeal to use to imagine ourselves in the circumstances and experiences of those others. The painter herself then suggests that she is concerned with capturing certain parallels between empty gallery spaces and the emptiness of contemporary art or the general emptiness of the present day.

In some paintings from the series, however, the guards are missing and it is precisely the emptiness of the space that links Galleries with the other presented series, Prague. For Ivana Lomová, her native city is a continuous topic, to which she has been returning for more than thirty years. As she says, these are paintings of her city, the city of her childhood and youth, as she feels it rather than sees it. But this is no peripheral romanticism; emotions here are again only subtly present, perhaps only fleeting sighs of nostalgia and melancholy, more for one who sees the city and feels it like painter. The scenes of old Veleslavín, Holešovice, and Libeň can reasonably be perceived as documentary records of the appearances of places that are still here and yet no longer are, and they may also be seen as the painter’s recollections. Like Galleries, however, they are, more profoundly, a painterly exploration of emptiness as a current state of affairs and of the existence of a certain space and atmosphere of timelessness which fills this emptiness – emptiness that we can, but need not necessarily, perceive as a metaphor of the state of mind or the emptiness of the world around us.