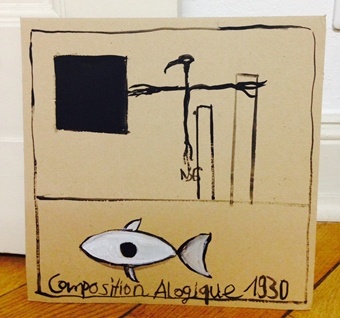 Jiří David, Andy Hope 1930, and Florian Meisenberg – three artists, three generations, three paths, and three different cities – Prague, Berlin, New York – where they live. And yet more unites than divides them: the remarkable lightness with which they cross not only boundaries of style and form and move through space and periods, and also with which they cross and sometimes even abandon the surface of the painting in order to come back to it again. On these surfaces appear aeroplanes, a Neo-Gothic chapel changing into a rocket, Batman and Superman, photographs of Hollywood stars, the iconic Suprematist square, expressive lines, dinosaurs, plastic Madonnas bought in junk shops – in short, on these surfaces the products of visual mass culture are mixed together with elements of autonomous art.

The once so sharply guarded boundary between high and low cultures disappears together with that certain arrogance about mass production by which Modernism has distinguished itself. Playfully, wittily, sometimes a touch maliciously, they immerse themselves into both the Utopian world of Modernism and the worn-out world of the culture industry. Their work surprises; it is fantastical, sometimes obsessive like life itself. In his Dialektik der Aufklärung (Dialectic of Enlightenment, 1944), written with Max Horkheimer, the philosopher Theodor W. Adorno states: ‘Light art has accompanied autonomous art as its shadow. It is the social bad conscience of serious art.’ The art of these three artists stepped out of that shadow a long time ago, and is, with a clear conscience, creating its own world without boundaries and intellectual inhibitions.