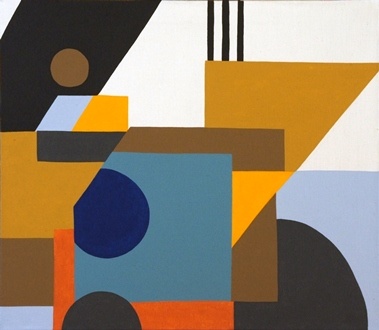 
For artists of Stanislav Diviš’s the generation, an important reason, if not the main one, for the acceptance of postmodern premises was to free themselves from the Modernist obligation to be Avant-garde and to open up the wide field of human ideas and art to the depths of time and a wide variety of styles. In his work, Diviš set out in this open space of the Postmodern on a search for the things that would resist chaos, while exploring what a work of art whose task is to endure can say about many of the things of this world.

Already in his early series of paintings, particularly 'Clowns', 'Reduction of a Landscape', and the aptly named 'Mythology', Diviš set out on the search for an order that would neutralize the world’s apparently hopeless incomprehensibility. Working in series is something that has accompanied Diviš’s art right up to the present day. ‘Scientific Realism searches for a way out of the vicious circle of the Modern and now also the Postmodern. I sense in it a hidden power to examine dualistically the question of creating.’ Thus Diviš described the concept that he created and seeks to use to grasp and define his own approach to making art.

For Diviš, the discovering of other new, previously unseen forms of an unknown language of form which would guarantee the seriousness of the result cannot be a reason for making art. In this way, Diviš’s hearing the soundless call of all things in the world, their concealed meaning, the opening up of hitherto unobserved layers of the meaning of everything we encounter. And Diviš’s art, which results from this, relates to the term Scientific Realism sometimes more clearly, sometimes more reconditely. In this way, Scientific Realism actually manifests itself as an inner plan of making art.

The reason is that Diviš, by his art-making, aloofly grasps things that have already been made or discovered, things that have already one way or another been uttered. It is as if he himself did not place any personal emotion or interpretation into the work. It is those uttered, already discovered things which in his paintings become totally new and unexpected, a new reality. It is as if in the same place or thing that has already once been found, the world opened up differently, in different contexts, in different meanings. Diviš’s inwardly disciplined form of expression, which defends itself against submitting without consideration, without control, to the avalanche of emotions and gestures, is thus a surprising new way of seeing something that was hitherto hidden. How else can one understand his 'Spartakiada' paintings or his 'Remains' series or his exciting, intimate series of paintings called 'Two Worlds'?

The exhibition in the Václav Špála Gallery comprises three series that were made beginning in about 2000. With them, Diviš re-entered the ‘museum of the imagination’ that emerged with centuries of human creativity and was proffered to the present not only for adoration but also, indeed mainly, for reflection. Everything is continuously present in that museum, everything is relevant. The series 'Geometry on Colour' works with inspirations that were originally monochrome, slightly raised, geometrical compositions, in order to reveal their hidden colourfulness as if it had been, already from the beginning, hidden in the relations and encounters of basic geometrical elements of the original works. Diviš finds fragments of memory in the works of the interwar Czech Avant-garde. The fragments, extracted details, are revived by a new interpretation of the mutual bonds and the symbolic roles of expressive colour fields, which awaken the long buried, culturally and psychologically rooted, consciousness about the contents linked to them. The stories of rulers on the other hand emerge from a powerful experience and from astonishment at the power of an artistic statement about thinking and about understanding a world that existed in a civilization remote from us in time and in spiritual and intellectual tradition. It again becomes clear that a work of art from the distant past, which represents an absolutely different cultural tradition, can be communicated mainly by its visuality.

Diviš works masterfully with the meaningfulness of colours as vehicles of content and as a means of stimulating emotions on large surfaces, which seemingly, only at first glance, lack a clearly individual style. But, in many cases, upon closer inspection, that individual style appears as a subtle vibration of the coloured surface or a fragile structure. This differentiation of the coloured surface, the coloured material, is, in addition to colour, the vehicle of meaning and content.

In the language of a very old medium, painting, Diviš reveals the appearance and content of things we meet in this world, yet have not seen.

representation in galleries and collections