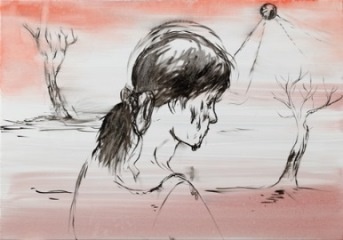 In the drawings and paintings made by Josef Bolf in the last decade, the metaphor of a labyrinth as a place entered by the protagonists of the narrative to get to know themselves while risking the very opposite keeps recurring. The housing estates and interiors of schools and hospitals built in the spirit of socialist modernism represent a non-human counterpart of the subjects thrown into them. The stiffness of the architecture stuck between utopia and ruin seems to predestine the lives of the characters who often make the impression of not knowing how they got into the picture. We, too, are not certain what brought them on the scene; perhaps a search for meaning, for a kindred spirit, or just an attempt to get away. Movement may have temporarily stopped in the paintings, however, their space is still imbued with unrest. It stays on the soft edge of consciousness, like a groove on a table top in which we keep running our nails unknowingly, or a sore spot on our bodies which we keep touching to make sure that the pain has not yet subsided.

A vast anonymous housing estate is an accurate and current metaphor of straying and painful individuation, while the forest represents a more traditional image of a labyrinth in the literary and painting tradition. In a forest, the horizon is rather sensed like a promise; a flickering line where the treetops meet the sky. When walking uphill on a narrow path, we imagine the top of the hill which is always a little further than it would have seemed. One must keep walking... What is the nature of the space stretching between where we have stood a while ago and where the destination might be, although it has not yet been reached? The sensed horizon is suddenly more important than the place where we are standing right now, it is more important than the space we are passing through; and when we look back, we recognize nothing; our temporary presence has not left any marks in the landscape...

The forest as well as an open landscape, employed as a setting for the depicted events, appear in the latest paintings constituting the core of the exhibition Tiny Radius of Awareness if not as a completely new, then still as an unusually strongly accentuated motive. After a series of paintings from the last two years, in which Bolf tended towards an increasingly complex narration by superimposing motives and materials, in his new compositions, he very often limits himself to a single strong motive set in a landscape unfolding into an illusory depth of the painting. A repetitive element can be seen in the boundary between closed and open landscape. In the new paintings, school and hospital corridors have found a counterpart in caves and rock crevices, hollows in the ground; which, on one hand, often represent places of descent into the underworld in popular imagination; while on the other hand, they have always represented refuge from danger and, in many respects, places where people started becoming what they are today – a species that is still part of nature while being tragically separated from it.

Despite the emphasis Bolf puts on the depiction of landscape in his paintings made for the exhibition Tiny Radius of Awareness, he still remains focused on the human figure. However, it is strikingly often seen as a (mere) figure; as something (rather than someone) that is somewhere, that has been put somewhere as a result of forces radically transcending the capacity or reach of our consciousness. Not only can these forces not be known in the spirit of positivist science; it is hard to even become aware of them. They remain in the dusky zone of awareness; they are too big, vast or dynamic; or, on the contrary, almost motionless. What if the gesture of looking back, so often seen in the paintings by Josef Bolf, is due to sensing (hyper)objects that defy the possibility of being known and internalized by the human mind? Then we could start perceiving Bolf’s paintings outside the psychological frame which is commonly used to interpret them. Tiny Radius of Awareness is not something to be realized in relation to society or culture. It is a result of moving towards the boundaries of all that is (still too) human in this world.