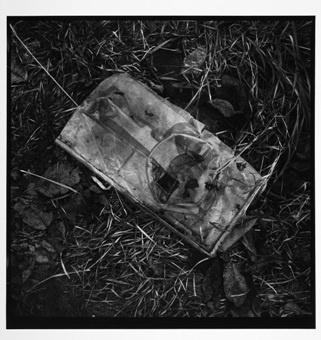 A great part of the work of the photographer Rudo Prekop has to do with the fundamental themes of human existence, such as the beginning and the end, light and darkness, and, indeed mainly, time.

Rudo Prekop
Two in One

A great part of the work of the photographer Rudo Prekop has to do with the fundamental themes of human existence, such as the beginning and the end, light and darkness, and, indeed mainly, time. The message of his photographs is so universal that, at least in the Euro-American context, but even in the context of the rest of the world that for us is more remote, the viewer can read, interpret, and understand them without explanation or prior knowledge.
Prekop works with black-and-white medium-format analogue photography, untiringly, persistently exploring its visual potential. This is often a more complicated path of exploring the peculiar qualities of the medium; he does not turn to the cheap gimmicks and references so common in art today. Purity, enchantment, desire, nostalgia, or, perhaps better, subtle irony or even the slightly bizarre – all of that characterizes the set Prekop calls Reálovky (singular, Reálovka), The Real Things.
Most commentators who have written something about Prekop emphasize his beginnings in the ‘Slovak New Wave’. That period is undoubtedly essential to his works from the second half of the 1980s and to a certain extent also to some of his still lifes and arrangements from the 1990s. But that can no longer be said of all the works in the whole group which Reálovky belong to. His Prague sojourn may have brought Prekop closer to, and linked him with, the tradition of Czech ‘imaginative photography’ and Czech ‘imaginative art’ in general to such an extent that, when mixed with the postmodernly playful Slovak New Wave, a special synthesis came about. Typical of a large range of works of twentieth-century Czech art is the search for extraordinary interpretations of ordinary reality. The art movement of the second half of the 1950s and of the 1960s as a whole followed on from the civilismus (admiration of the technical achievements of civilization), Surrealism, and Existentialism of the1930s and early 1940s, and restored a tradition that had been interrupted by force. In photography the ‘rehabilitation of the everyday’ was carried out with particular intensity. When looking at Prekop’s Reálovky series we have to recall the works of Emila Medková and Eva Fuka, and perhaps surprisingly we also sense the development of the legacy of the phenomenal Josef Sudek, which cannot be avoided in the Czech milieu. As Lucia Benická wrote, Prekop almost always works with mystery, the search for new form, ‘composing his own semantic ABCs’.
The Reálovky series is essentially a photographic exploration of found objects, most of which come from the great outdoors and concern the long-term relationship between human beings and the land. The main axis of the series comprises discarded objects − the residue of human activity − in combination with more or less unfettered nature. In these photos, the strange beauty of trees, bushes, and grass stands out, as well as that of artefacts linked with human beings. In particular, Prekop chooses the seasons that enable him to take good photographs of his chosen subjects, for example, the structure of leafless trees or, in a whole range of photos, the striking element of snow. Bare trees, fallen leaves, or a broken covering of snow are, however, also an indirect reflection of the flow of time. Time here, however, is odd: the photographs may move in a sort of timelessness and neither object nor landscape makes any reference to a specific time, yet the slow flow of time is almost tangible. On the other hand, despite all the lyricism, poetic quality, and fantasy, an unsearched-for beauty occasionally flashes through dry wit, pointing in the direction of Jasanský & Polák (which, like the imagination of Josef Sudek, is so typical of the Czech scene).
The creation of a work of art is a sensitive, intellectual game. It is an adventure of seeing. It is an unending dialogue between artist, art work, and viewer, enabling the creation of new worlds. And Rudo Prekop has perfectly mastered this rite of initiation.